J. H. Prynne’s poem, from his 1971 volume Brass, is titled ‘Thinking of You’, but at first sight it appears to address kitchen waste, rather than the traditional romantic object of the lyric poem. This form of bathos has its own dark comedy, a bitter comedy that is reinforced by the sheer monotone relentlessness of the repetition of the references to the 'can' or its ‘fat’ within the poem’s series of functional, prosaic statements. These functional-yet-gnomic statements are layered, or laid down, almost like a sequence of disregarding slaps. I say almost like, because in their diminished functionality the slaps are sloppy, miscast ones. In fact Prynne's use of unexpected punctuation, such as the comma inserted in line 4, can be seen to effect the breakdown of the violence of philosophical logic - that sterile argumentative fury which is so helpful for efficiently constructing a dissertation, or maintaining (and raising) one's place in the hierarchical academic 'rank' - into a species of philosophical verse which is cognition of academic violence and not its unwitting perpetuation.

Not going forward let alone re-
turning upon itself, the old fat in the can.
The old fat rises to a reason and
seems because of its can, not going
forward but in its rank securely,
so as to be ready. Divinity rises to
no higher reason since going up alone
is returning itself to the can. You choose
if you like whether we stay in the rank
or go forward as alone we can, divinely
secured about the midriff. Older than
forward is the way we might go and
grow because we do, fat. In the can it
is the rancid power of the continuum.

Human sublimity – such as the sublimity of romantic love, or of the visionary capacity of our imagination – is referred to here, in terms of access to the divine. Perhaps the solitary transcendental imagination – when we each, ‘alone’, are ‘divinely/ secured about the midriff’ – is privileged over sublime I-thou relations, or being as the Siamese twin of a You. But any human sublimity, solitary or otherwise, is bathetically reduced to old fat, animate spirit converted into inanimate matter. You could call this Prynne’s Marxist materialism: a critique of alienation, of the reifying commodification of the subject, which in fact holds out little hope for humanism.

But the use of the comma in the penultimate line, for example, seems to complicate this reading. ‘we do, fat.’ These words could be taken as suggesting our conversion to fat in the can, dead matter (‘we…fat’), but perhaps they simply refer to the way that, when we ‘grow’, we become fat. Hence Prynne stills holds out the possibility that, even after all the abuse under capitalism, we remain (perhaps overweight) humans with spirit. In addition, the proposal that we might ‘go forward as alone we can’ claws back the fact of human agency, our status as can-do mammals, from the very word for the inanimate lump of metal itself: ‘can’. Humans ‘can’ create works of spirit, such as this poem, and such a human cultural construction can appear unusually bloated, or ‘fat’, as a  consequence of the poet’s intention to double-space its lines (the double-spacing of ‘Thinking of You’ is unusual in Brass, though there are areas in ‘Of Sanguine Fire’ which are double-spaced too). So you could say that if ‘Thinking of You’ itself, as a poem, ‘is’ fat it is only because Prynne decided that it should be so; indeed the air between the lines which fills out the poem on the page or screen could be said to emblematize the human spirit which chose to put it there, just as Prynne chose to put spaces between the constituent words of his later title ‘Air  Gap  Song’. 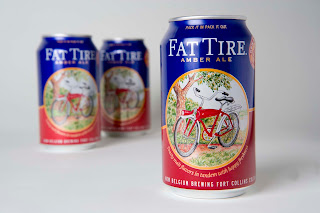 But of course the poem sees us old (modern) humans, emblematized as ‘old fat’, to be in dire straits now – spirit contained within a reified can-world. ‘Not going forward let alone re-/ turning upon itself, the old fat in the can.’ As Keston Sutherland rightly suggests in his article on Brass, 'Hilarious Absolute Daybreak' (online here), the poetic performance of bathos effected in Brass entails not ‘lamentation’ of hopelessness so much as a direct statement of hopelessness. Hence the refusal of the idea of spirit’s self-critique: ‘let alone re-/ turning upon itself’. Quoting Prynne's poem ‘Crown’ from his The White Stones, Sutherland writes:

‘Brass does what The White Stones, Olson and Heidegger programmed themselves not to do: it recasts the Heimkehr of fortune as the paralytic transit from destiny to modern politics, and it does that by evacuating lamentation rather than by universalising it. Brass is the reversal of a reversal, “the question/ returned upon itself”.’

Floating contained as the fat in the can, the modern spirit of ‘Thinking of You’ reprises the ‘crust’ from the earlier Brass poem ‘The Ideal Star-Fighter’: the ‘slight meniscus’ which ‘floats on the moral/ pigment of these times’. In each poem the meniscus, the spirit-level – that is, the attenuated form of our spiritual life – can be seen to be an epiphenomenon of a moralizing, mass media-entwined contemporary politics. The second stanza of ‘The Ideal Star-Fighter’ begins by commenting on this particular version of an infantilizing politics of the ‘ought'.

And so we hear daily of the backward
glance at the planet, the reaction of
sentiment. Exhaust washes tidal flux
at the crust, the fierce acceleration
of mawkish regard. To be perceived with
such bounty! […]

True to Sutherland's imputed explosion of 'destiny' within ‘modern politics’, this poem adds that a politics which dominates the environment whilst cosseting the population in an enforced state of eco-friendly ‘moral/ stand-by’, remains vulnerable to the inevitable, predestined revenge of nature that it is bringing upon itself:

[…] We should
shrink from that lethal cupidity; moral
stand-by is no substitute for 24-inch
reinforced concrete, for the blind certain
backlash. Yet how can we dream of
the hope to continue, […]

The bad idealism represented by ‘moral/ stand-by’ has a contrary, the last lines here imply. It is just that the hopeless micro-climate of Brass stifles such a good morality at inception. ‘how can we dream of/ the hope to continue’. Likewise in ‘Thinking of You’, the old fat attains ‘a reason’ – perhaps that of Kantian moral normativism – and remains canned. Lacking the hope to continue, it is ‘not going/ forward but in its rank securely’. This is precisely ‘so as to be ready’: as if it too has been convened by the TV/Twitter news to ‘moral/ stand-by’.

But then some lines later ‘Thinking of You’ proposes that we can still choose to ‘go forward as alone we can, divinely/ secured about the midriff’. It seems to me, however, that these lines contain a critique of reason à la moralizing progressivism: Prynne is noticing here a false, privatized progressivism, supported by religion or transcendence. Earlier in Brass, the poem ‘L’Extase de M. Poher’ had already warned against the self-insulation of an over-articulate poetic avant-garde from mass society: here carnal collision was already advocated over being ‘divinely/ secured’.

[…] No
poetic gabble will survive which fails
to collide head-on with the unwitty circus:
no history running
with the french horn into
the alley-way, no
manifest emergence
of valued instinct, no growth
of meaning & stated order:

Earlier lines in ‘Thinking of You’ suggest moreover that a movement of private reason – ‘going up alone’ – itself hobbles divinity’s own civilizing action:

[…] Divinity rises to
no higher reason since going up alone
is returning itself to the can. […]

What might it mean for transcendental potential to rise to a ‘higher reason’? And what might it mean for a collective exercise of reason to escape return to ‘the can’? With the latter concern we are returned to Prynne’s early visionary politics of socialized language, which (as I note in my book on Iain Sinclair) he propounded in an important letter to The English Intelligencer of 14 March 1968, but also, in The White Stones, in the memorable third and fourth points of the ‘up-/ shot’ concluding ‘Questions for the Time Being’:

[…] 3. What goes on in a
language is the corporate & prolonged action
of worked self-transcendence – other minor verbal
delays have their uses but the scheme of such
motives is at best ambiguous; 4. Luminous
take-off shows through in language forced into any
compact with the historic shift, but in a given con-
dition such as now not even elegance will come
of the temporary nothing in which life goes on.

By the time of Brass  the life-world has darkened from our ‘temporary nothing’ to ‘the hate system’ and ‘the entire dark dream outside’ of ‘The Ideal Star-Fighter’: ‘the rancid power’ of the progressivist-capitalist ‘continuum’. True to Adorno and Horkheimer’s analysis in their Dialectic of Enlightenment, enlightenment has reverted to mythic barbarism in the can-world. But still in ‘Thinking of You’, arguably, self-transcending, ‘corporate’ and ‘historic’ linguistic activity is identified by Prynne with the emergence of visionary potentials. The final lines of ‘Thinking of You’ show that such ‘Luminous/ take-off’ is never abjured as a possibility for our collective exercise of reason, even in Brass.

[…] Older than
forward is the way we might go and
grow because we do, fat. In the can it
is the rancid power of the continuum.

This last particular 'fat', referring as it does to the traveller on a ‘way’ of collective reason which is ‘Older than/ forward’, or more mythic and irrational than progressivist enlightenment reason, yet also – precisely as such a life-force or exercise of crazy vitalism – a transcendental potential which can itself ‘grow’ and rise to a ‘higher reason’, arguably looks back specifically to the ‘fanatic resin’ mentioned in the preceding poem in Brass, ‘Es Lebe der König’.

fanatic resin and is at once forced in, pressed
down and by exotic motive this means the rest,
the respite, we have this long.

In both poems Prynne suggests that this is now our time of decision: in ‘Thinking of You’, ‘we might go’, and in ‘Es Lebe der König’, ‘we have this long’. Given that ‘Es Lebe der König’ is dedicated to Paul Celan and that the ‘You’ of which the succeeding poem’s title is thinking could well again be Celan, it seems that ‘the rest,/ the respite’ within which reason might decide to grow is indeed our own historical moment following the reversion of enlightenment to myth in the Holocaust. ‘Es Lebe der König’ indeed has its analogue to the bad alternative, the canning of reason with ‘the rancid power of the continuum’: the moment of restriction within instrumentality when ‘the beloved enters the small house’. ‘The house becomes technical, the pool has/ copper sides, evaporating by the grassy slopes.’ Yet the very evaporation of this version of the can hints that we still have respite within which to decide whether to let our potential path of reason atrophy into academic sophistication, and ‘re-enter the small house with/ animals too delicate and cruel’. Structured by bathos, hopelessness and the recognition of technology’s restriction of spiritual horizons, Brass can still imagine its own copper sides breaking open, growing into a wider path on ‘grassy slopes’. In ‘The Five Hindrances’, Prynne writes of the way of collective reason to which Brass thus points in terms of glowing ‘air’, spirit. ‘The future history of the/ air is glowing, with amity beyond the path itself’. The present-day time of decision, when the narrow old way might vanish for good, is also the moment of ‘manifest emergence/ of valued instinct’, of ‘growth/ of meaning & stated order’. For this contemporary moment of decision, ‘The Five Hindrances’ adds, is as dazzling and bemusing as the visionary element which it holds in fruition:

[…] Now we come through
the air we breathe bemused by the week: the fire
of heaven, gentle, very light. […]
Posted by Dr Robert Bond at 15:29 No comments: 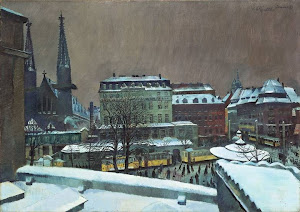 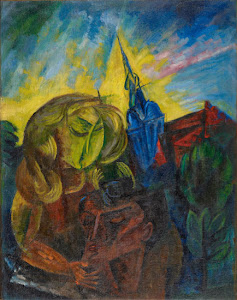 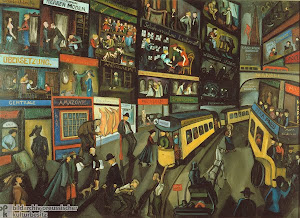